As Polish parliamentary elections are fast approaching, I decided to share with you my thoughts about good and bad decisions the ruling party made during the last term of office. Looking back at the last 4 years, there is definitively a lot of potential for improvement.
Don’t get me wrong – the main reason I am writing this article is because I love Poland and I am willing to fight for the long-term well-being of Poland & its citizens!😊

Firstly, I would like to highlight some positive aspects of the last term, with PiS as the ruling party.

Nevertheless, there are 3 negative law changes which I must point out:

Although it can’t be denied that PiS has made some good decisions during the last term of office, my overall opinion about the last 4 years is negative. Let me explain why.

The current political system in Poland is dangerously close to be a dictatorship, where judges are fully controlled by the government. With Constitutional Court demolition and high Supreme Court dependency on politicians, it may become risky for Polish citizens to criticize the government & the ruling party – this is also characteristic of any form of dictatorship in the world.

Even writing this article, as Sii CEO, carries on an element of risk. After its publication, the government may carry out a close inspection of Sii. However, being a courageous guy, with transparency as one of my core values, I openly say what I think, fighting for the long-term good of Poland & Polish people.

Such a decision means a less productive life. Personally, I have no time to do the shopping during the week because I am busy with work and family life. Now, I am forced to do it on Saturdays, in much worse conditions, with a huge amount of customers & heavy traffic.

Poland used to play a more significant role – 4 years ago we had a much stronger position in the EU, better reputation, greater negotiation power & higher impact on EU decisions. Now the situation looks totally different and Poland has 1 partner left – Hungary, with its populist president Mr. Orban.

What I have in mind here is the particularly bad decision of not buying Airbus helicopters in 2016. Poland missed a great opportunity to attract a new strategic investor to Poland. Moreover, Airbus could have created thousands of aeronautics and engineering jobs in Poland. We could now be the 5th solid footprint for Airbus, after France, Germany, Spain & England. Because of a bad decision, Poland missed this amazing opportunity.

Why is implementing the 500+ program a bad decision according to me?

The main risk and problem of 500+ is that it causes an increase of the public expenses which are financed by social security taxes. So it will cause an increase of ZUS for employers & employees.

Lowering the retirement age when people live longer, and retirement pensions are already very low in Poland is completely absurd. In my opinion, it is an unwise populist decision, taken only to win the next elections, that will have negative long-term consequences for the Poles.
I admit that I am in favor of increasing the lowest retirement pensions in Poland in the case of poor people, but not reducing the retirement age. The problem is how to find money to cover those expenses? The only solution is to increase taxes (ZUS, PPK, etc.), which will have bad long-term consequences for our country. Why? I discuss it below.

The graph below presents an increase of public expenses in Poland over the last 4 years. As you can see, the expenses grew since PIS took power in 2016.

If you want to spend money, you need to have it. If you don’t, you need to raise taxes to fund initiatives like 500+, additional pensions for the retired, PPK, ZUS, etc. 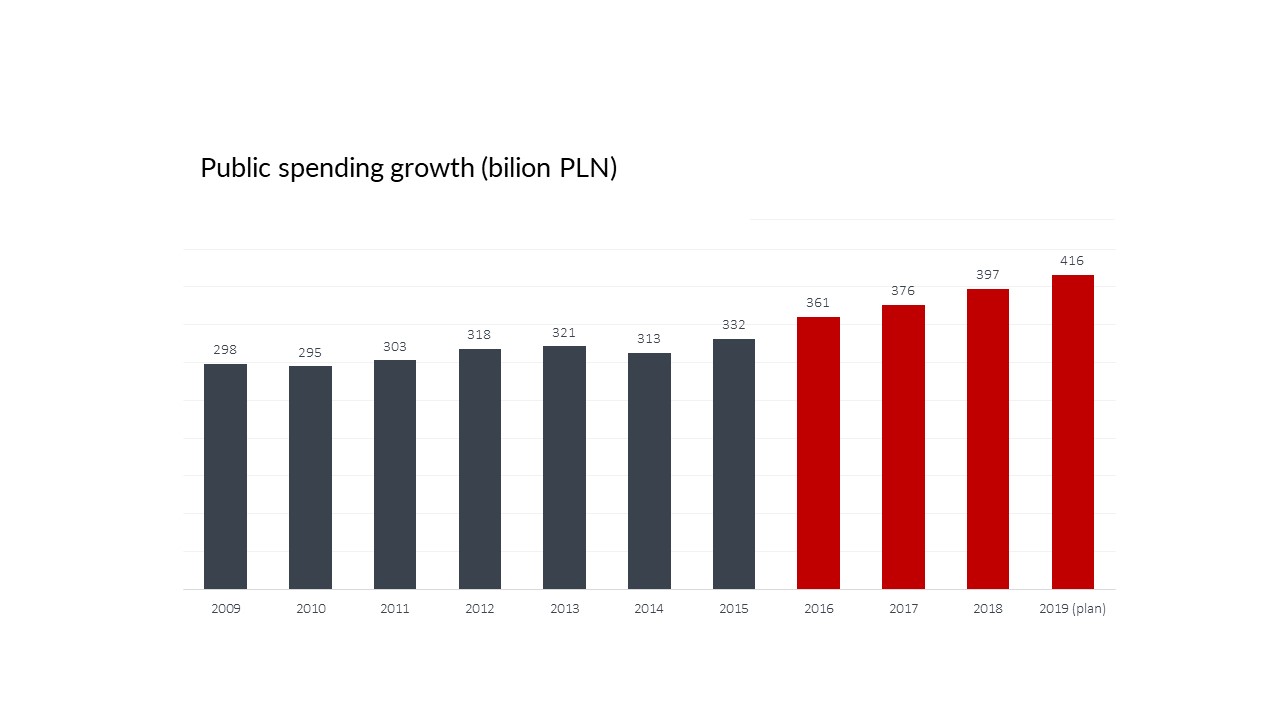 It is not surprising that people are happy to receive money for nothing. But this money is not a gift from PIS. It comes from taxes paid by Polish citizens and, above all, their employers – companies like Sii. Some Poles do not understand that this money is not “for free” & they will have to pay for it (through higher taxes & higher ZUS).

Such an increase in taxes means that Poland will become less competitive in comparison with other countries. It will make some investors and multinational companies stop investing & creating jobs in Poland. Some businessmen will be motivated to invest elsewhere. Investors are attracted by liberal countries giving business freedom & reasonable taxes (for example Switzerland, the Netherlands or Ireland in the case of Europe).

What is more, there will be no possibility to increase salaries because the unemployment rate will grow, lowering the employee versus employer negotiation power. Explanations:

Using TVP (Polish national TV) financed by public money (our money, not PiS money) as a propaganda tool reached an unacceptable level. You can read more about how I feel about that in my article ’10 things I don’t like about Poland’.
TVP propaganda has some negative impact on the beliefs of the Polish people, who have become more racist and more conservative. This causes an unhealthy atmosphere of hatred between conservatives voting for PiS & other groups of people. The current political situation divided society to break into groups, some of which are fueled with hatred towards each-other:

Because of PIS propaganda on TVP, now there are on average more racists among the Polish people than 4 years ago. In general, the atmosphere is worse. People of race, religion or sexual orientation other than that of most Poles are more scared of living in Poland today than 4 years ago. The level of tolerance among Polish citizens is lower, in general.

There are many doubts as to what political decisions will be made soon, especially when it comes to the ZUS increase in the upcoming months, which will be needed to finance the growing public expenses.

To sum up, I have serious doubts as to whether it is still worth investing in Poland.

I really love Poland & Polish people. But with PIS as the ruling party, I don’t think it is a good long-term decision for companies & wealthy individuals to invest in Poland.

If Poland wants to continue to grow & win during the upcoming years to the benefit of its citizens, becoming happier & more powerful than Western European countries for example, it should:

Poland should get inspired & follow the examples of successful liberal countries like Ireland, Singapore or Switzerland; not socialist countries like France, Italy or Greece. Those 3 countries have:

(Greece, Italy & France stay alive so far & do not go bankrupt thanks to tourism – millions of visitors spend billions of euros in those countries each year. Poland does not have such a big income from tourism, unfortunately).

So I will not vote for PiS in the upcoming elections, because PIS plans will have a negative impact on the economy, society & polish people life in coming years.

Who will I vote for then? I am not sure yet. I will make my decision after the final debate.

Have you made your mind yet? I am curious to know whether you agree with me or you think PiS is the best solution for our country. Either way, let me know in the comments below.

Some people care only about fact how much money they can receive “for free” from our government, forgetting about other matters which you mentioned. They do not see, that at the end of the day they will spend more for other goods and/or pay higher taxes and final bilans will be negative.

I stopped saying they think, they spend, they say, etc.

Focus on what you can do and how you can influence the people around you.
It is easy to say that they are not wise and self-centered, but what you’ve done to change that?

It’s really sad to see that the only party with any kind of economic mindset towards the upcoming election is Confederation Freedom and Independence. It’s the only group that has any kind of a real, economically driven programme that promotes work and talent.
All the others are just either buying lazy people or focus on anti-PIS sentiment, but without any ideas of their own.
Sad, sad, sad times for Poland indeed 🙁